The actor Joshua Malina is one of those guys you know from TV. You may not recognize his name, but his boyish face would ring a bell.

Mr. Malina has worked in television for more than two decades, with recurring roles on a handful of hit shows, including “The West Wing” and “The Big Bang Theory.” Still, by his own unembarrassed estimation, Mr. Malina is hardly a star. “You know, I don’t have fans,” he said in a recent interview. “I’m a working man’s actor guy. I’m not one of those people who have fans.”

Well, not until recently. In 2012, Mr. Malina became a regular on “Scandal,” the high-drama ABC thriller that stars Kerry Washington as a political fixer. “Scandal,” whose fifth season began Sept. 24, is one of the most watched dramas on TV, but among observers of the industry it is best known as an exemplar of the power of social media to catch and hook an audience.

Every Thursday since the show’s premiere, most of the “Scandal” cast and crew have used Twitter to add live commentary that runs during the broadcast. The cast’s social media presence — which, according to the ratings firm Nielsen, inspires hundreds of thousands of tweets from viewers during every broadcast — has been credited with deepening the program’s relationship with its audience.

Television used to be a supremely solitary experience, for its creators and for its viewers. The writer David Foster Wallace called it “an absolute godsend for a human subspecies that loves to watch people but hates to be watched itself.” For a time, digital technology seemed to be deepening the rift. TV has always been spatially isolating, with each of us cut off from everyone else who was watching. Then DVDs and DVRs and, later, on-demand services like Netflix added a temporal disconnection, too, making it increasingly unlikely that everyone else everywhere else was watching the same schlock at the same time.

But that’s beginning to change. The emergence of social TV hits like “Scandal” suggests how, over the next few years, technology could transform television into something more than a one-way, disconnected, time-shifted experience. It’s not just that today’s shows are better, that we are in a “golden age” — or what some critics have upgraded to a “platinum age” — of TV. Instead, largely because of social media, TV is becoming an interactive, communal experience. And in an unexpected throwback to the earliest days of television, the best stuff, rather than playing out whenever we like, is best experienced live, because that’s when everyone else is watching, too. 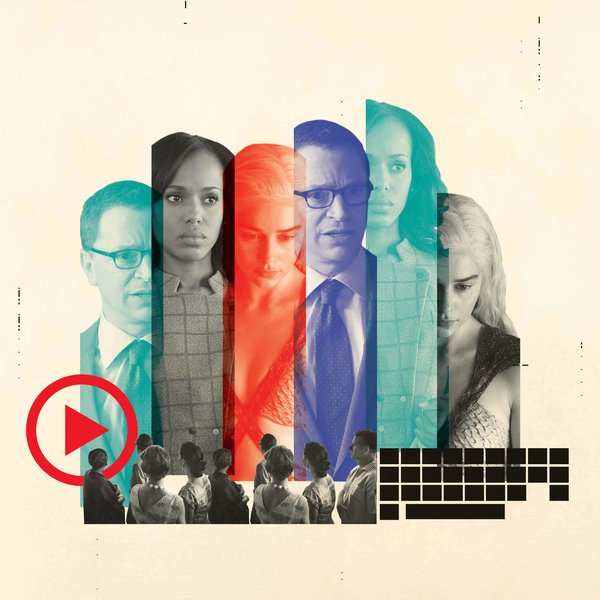 Mr. Malina, 49, is in some ways the unlikely embodiment of a new kind of TV star in a new age of television. “I’m 25-plus years into my career, and it’s only with ‘Scandal’ and Twitter that the concept of my having fans with a last name other than Malina has even entered into my consciousness,” he said. He doesn’t just tweet. He’s on Vine. He’s on Periscope. As social media experts say, Mr. Malina “engages,” and in talking about his newly altered relationship with those who know him from TV, he can sometimes slip into describing his online presence as his “brand,” though he quickly apologizes for “sounding mercenary.”

“I like the back-and-forth,” Mr. Malina added. “I miss doing live theater, where you actually can hear someone chuckle at something you just said, or a gasp because something suspenseful has happened. On TV, you didn’t get that — but now there is a sense of immediacy to the reaction. It’s like, ‘Oh, there are people watching the show and responding to it.’”

The community of viewers will probably become more important as technology continues to alter TV. Twitter has been the leading platform for such reactions. In a coming feature that has been code-named Project Lightning, the short-messaging network plans to add several improvements for following along with live television. But Twitter’s current influence may be just a peek at the communal future of TV. Several emerging digital experiences fit snugly into what might be considered the TV of tomorrow.

Last year, Snapchat, the picture-messaging app favored by teenagers and college students, began creating Live Stories, a series of daily video vignettes stitched from multiples users’ perspectives and covering a range of topics, including life in the West Bank and the celebrations of the marriage equality movement. What’s unusual about Live Stories is that they aren’t personalized across Snapchat’s audience. Every day, Snapchat presents the same handful of new stories to most of the app’s user base of more than a hundred million viewers. After a day, you get a slate of new videos, and the old ones disappear. For viewers, the experience of watching Snapchat’s stories is thus communal — everyone is watching pretty much the same thing at the same time.

Periscope, an app purchased by Twitter last year that lets users film and broadcast videos of their surroundings, also puts a premium on live, group experiences. You can watch a Periscope video of a concert or a party long after it was shot, but that’s a diminished experience. The app superimposes audience comments on the video, so if you watch live, you’re seeing not just the performance on-screen, but also how the audience is experiencing the performance.